View of the Teklanika River looking in the general direction of Mt. McKinley  (see all pictures)

For a little background, Denali National Park is maintained as a wilderness area. Essentially this means that there are strict controls in the park which are set up to give the wildlife and wild plants every possible advantage over us humans. The park is larger than the state of Massachusetts (Denali = 9,375 mi2 = 24,280 km2), and has a single (dirt) road running it's length. There are no maintained trails in the bulk of the park (unless you count the local bear and caribou trails), and the only access to much of the park is via park bus. At the paltry speed of about 25-30 miles per hour [about 40-50 km/hr], it takes over 13 hours to make one round-trip through the park!

The park itself is divided up into about 45 backcountry sections and in each section there are allowed only about 8 people per day! Just imagine having only about 360 people in the entire state of Massachusetts! Once you get away from the roads, the park is truly kept in wilderness condition! That is what makes Denali National Park such a spectacular place to be ... as long as you plan ahead! 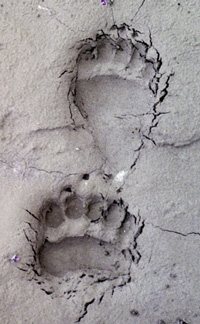 Take only pictures.
Leave only footprints.

At the beginning and end of our trip, my friends and I stayed at the Teklanika campground. It is a very nice place but clearly designed for the "tourists" who don't want to leave the comfort of their RV's. As with most local parks in the rest of the country, there are trails near the campgrounds, and also like most local parks, they are usually crowded with people.

Fortunately my friends and I were able to obtain backcountry passes and after fording the Teklanika River we arrived in our section, which had the glorious name of "section 28". Still, for the three nights we had the passes, it was "our" little section of the park and perfect for our group. The mountains section only rose up about 3,000 to 4,000 feet [about 1,000m] but it was enough to get up into the easy climbing of alpine zone and far enough away from the people.

In general, the landscape of the park is very diverse. In our corner were essentially gentle rolling hills surrounded by spongy tundra. On the other end of the park is Mt. McKinley which is actually the highest point in all of North America (20,320 ft = 6,193m). From base to peak, it even has a higher elevation gain than even Mt. Everest (base of Mt. McKinley is about 2,000 ft. [600m]). It is truly a sight to be seen. Mt. McKinley has snow all year round, and even our little section still had some snow packs in June. There is something exceptionally fun about sledding down snow packs in the summer!

Given that nobody in our group was into mountaineering, our section of the park was well suited to our needs. Perhaps it would have been a little nicer if we could have had a better view of Mt. McKinley, but that would ruin my excuse to go back there again!