For the second week of the Alaska vacation my friends and I got away from the high mountains of Denali National Park and instead went sea kayaking in the pan-handle region near Juneau, AK. More specifically we visited Glacier Bay National Park where the three of us climbed into kayaks for the first time in our lives and emerged with sore bottoms 5 days later.

One of the best things about our trip was the wildlife. After a disappointing show of wildlife in Denali National Park, I thought I was going to have to go home without ever seeing a bear while in Alaska. Luckily the wildlife in Glacier Bay National Park weren't anywhere near as camera shy. In fact, the number of animals we saw was overwhelming. Included in our count are: 2-grizzly bears, 1-black bear, half a dozen bald eagles, 7-killer whales, 5-humpback whales, about half a dozen porpoises, dozens of seals, 5-10 sea lions, and of course much more! Unfortunately even though almost all the wildlife was curious about who was visiting their home, it was a case of the camera not doing the situation justice. Out of all the encounters we had, only a couple of the pictures turned out okay 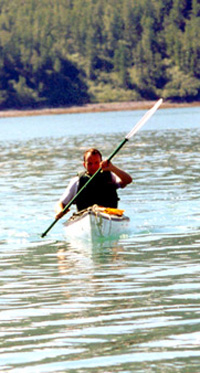 Kayaking in the Bay.

In the 5 days we were in the park, we kayaked some 30 miles [about 50km] over beautiful sparkling blue water. The park itself is also quite large, boasting a size larger than the state of Connecticut. (Glacier Bay = 5,130 mi2 = 13,290 km2) Thus we had to choose our route carefully in order to see as much as we could. In the end we chose a path which forced us to cross the 3 mile [about 5km] wide bay, a route which also brought us close to the very active Lamplugh glacier, and which allowed us to paddle a few miles through a non-motorized zone. During the Bay crossing we ended up with a little more than we had bargained for as we had to dodge the massive 1,000+ ft.[300m] cruise liners and their huge wake. Aside from tired arms and a minor scuffle between a rock and one of the kayaks, we managed the crossing just fine.

After checking out the glacier we began our trek toward the pick-up point and in doing so we crossed the non-motorized zone. The experience within the zone was like a movie scene from Disney. In addition to the normally curious harbor seals and the playful dolphins was a whole herd of sea-lions wanting to see who was invading their territory while in the meanwhile a pair of humpback whales circled the area around us looking for food. There was so much to see and watch you never knew where to look next. At one instant a sea-lion may poke it's head above the water about 5-10 feet [about 1.5-3 meters] behind you and stare at you while in the next moment you could look in front to see the familiar whale spout and then whale tail as it made ready for another dive. That night we camped near the edge of the non-motorized zone, and all evening into the morning the sounds from the whale blow-hole could be heard.

Despite my initial hesitation to take up sea-kayaking, the trip was definitely worth it. It was an experience I will certainly never forget and hopefully some day I will get a chance to return.